In late summer 1969 and throughout that autumn, tape copies of one of Glyn John's acetates of Get Back were aired by a number of American radio stations, including WBCN in Boston. WBCN obtained a reel-to-reel tape of an acetate and broadcast the tape on 22 September 1969. The broadcast was preserved on another high-quality reel by a listener. At the end of 1969, the recordings turned up on The Beatles' first bootleg release titled Kum Back and has been a staple in The Beatles' bootleg canon ever since.
In 2012, the Elektra Acetate was shared on torrent sites, blogs and on forums around the net, this is the earliest version of Glyn John's first Get Back compilation from early 1969.
The acetate features the same stereo mixes that were famously broadcast on US Radio in 1969, later leading to the bootlegs 'WBCN Get Back Reference Acetate' (Yellow Dog) and 'Posters, Incense and Strobe Candle' (Vigotone). Both of these discs had their problems, noise reduction for one, seriously damaging the high frequencies, and also some pretty bad low frequency hum.
This new source is far superior but the problem with this new Elektra Acetate however is that it is noisy, very noisy, suffering all of the problems you would expect from a 50 year old acetate. So for this Helter Skelter release, unlike other variations circulating, no noise reduction was used. It was painstakingly de-clicked, de-popped, and de-crackled each track one-by-one, putting the integrity of the music above anything else - leaving a very enjoyable listen, of what is a very important historical recording. Added also are the stereo elements that were missing from the acetate, taken from the Yellow Dog disc (only a section of dialogue), some tracks are available in longer form in mono with extra studio chat, but this is simply stereo only.


The disc has been pitch, phase and level corrected and the peak limiting applied to the original disc undone.

As for the name 'Elektra' acetate it could be a bad translation of Electrola. German pressings of records between 1972 to 2002 bore the name EMI Electrola. These pressings may have been imported to Japan and the original Japanese bootleggers familiar with that name instead of just EMI, translated it incorrectly. 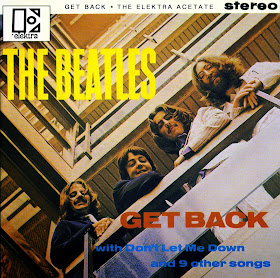 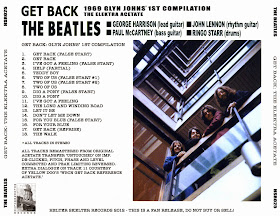 The following information below is from:

It has been commonly believed, based on John Barrett's research and Mark Lewisohn's Beatles Recording Sessions, that Beatles' producer, Glyn Johns, made his first mixes of the Get Back material on 10-13 March 1969. However, further research by Lewisohn (in Chronicle) and evidence on the film crew's Nagra reels reveals that Glyn actually did the mixes during the latter part of the Get Back sessions in January 1969. The March date apparently being when the master reels were logged at E.M.I. Subsequently, acetates were cut from Glyn's first mixes. Apparently, no photos of the acetates seem to exist and it is not commonly known where any of the acetates are today.

This compilation, surely, was never intended for release. It was merely a reference mix to see how the recordings sounded on record and for The Beatles to take home and listen to. This mix is significantly different than the "final" mixes. It's noticeably less processed both in terms of editing and the use of reverb. It also includes an otherwise unavailable version "Get Back", a short cover of Jimmy McCracklin's "The Walk" and a variety of other audio snippets found nowhere else from a master tape. The acetates were probably cut late 30 January 1969 at Olympic Studios. Many of these performances (with new mixes) were, subsequently, chosen for all versions of Get Back. See the 11 March date in Recording Sessions for a description of these mixing sessions. What's noticeable here, though, is that this is far and away the best sounding tape of this material you're ever likely to hear.

THE MASTER REELS:
I have noted Doug Sulpy's DDSI identifcation numbers.
The mixes used on the acetate are in red text.

22.58 Rocker
22.59 Save The Last Dance For Me
(In Recording Sessions, Lewisohn seems to indicate that these two performances are mixed here. He originally dated the mixes as 10 March 1969 and sequenced them in this position among the other mixes. There should be room for them on the reel however, no other evidence has surfaced to indicate they are on this reel. Barrett does not list them. No playbacks are heard on the Nagra reels)


Probably mixed 27 January 1969
25.46 For You Blue (with two false starts)
27.63 Get Back
(This is the take that formed the main portion of the single mix. It could also be assumed that this mix also includes the end fragment found on the obscure bootleg, O.P.D. and disc 8 of The Get Back Journals 1.
27.71 Get Back (Barrett only list "Get Back" once)
27.72 Get Back
(Apparently, Glyn felt these two mixes of "Get Back" were inferior and chose to exclude them from the acetate)
27.83 The Walk (listed by Barrett as "When You Walk")
(Lewisohn makes no note of this mixing session but a playback of this portion of the reel can be heard on Nagra reel 1113B at the beginning of the 28 January session. Surely the mix was done the previous evening)